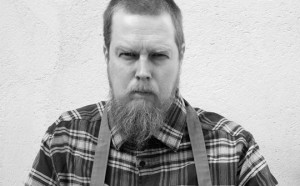 Tuomas Kyrö (b. 1974 in Helsinki) is a brilliant humorist and satirist who is also skilled at writing more realistic narratives. He has published several novels and is known in Finland also for his humorous columns and TV appearances. He has received many awards for his work, including the Kalevi Jäntti prize, the most prestigious grant for young Finnish authors.

In his latest novel, Kunkku (‘Long Live the King’), this talented satirist gives a daringly un-PC account of the (fictional) life of the last Finnish king while rewriting the history of the 20th century. In Kerjäläinen ja jänis (published in English translation as The Beggar and the Hare), a Romanian beggar by the name of Vatanescu and a hare that has narrowly escaped death and is actually a rabbit, make their way around Finland in search of happiness. That novel was inspired by Arto Paasilinna’s classic work The Year of the Hare but is set in the present day.