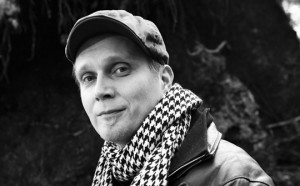 Mooses Mentula (b. 1976 in Tuupovaara) portrays childhood in northern Finland in his works. His debut work, a volume of short stories entitled Musta timantti (‘Black Diamond’), was published in 2011. That was followed two years later by his first novel, Isän kanssa kahden (‘Like Father, Like Son’).

The stark contrast between urban southern Finland and the unrefined northern part of the country has been a rare theme in literature of recent years. Mentula’s realistic descriptions of the rural districts are as humorous as they are melancholy. Above all, Isän kanssa kahden is also the story of a broken family and a boy who is forced to shuttle between two worlds.

Mooses Mentula grew up in the Kainuu region in eastern Finland and spent a total of seven years in Lapland. He has worked as a journalist for radio and various newspapers. Today he is the headmaster of a small school in Tuusula in southern Finland.