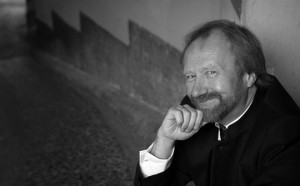 The head of the Aleksanteri-Institute Markku Kivinen is presenting "Betongötter": In a semi-urban concrete neighbourhood of the 1970s that once was praised as an architectonical vision of a new form of living, the suburbs represent Finland’s upheaval towards modern times. Telling their stories in diary entries, the five highly different protagonists describe their hopes and their disappointments.