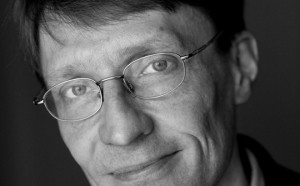 The novels by Markus Nummi (b. 1959 in Helsinki) are multi-layered philosophical texts in which the world of children is foregrounded in preference to the crazy adult world. He studied history and philosophy and in addition to novels and children’s books, he has also written screenplays and has worked as a director.

Kiinalainen puutarha (‘The Chinese Garden’) is a tale of love and friendship in Central Asia at the turn of the 20th century. In the style of 1001 Arabian Nights, a man who is being held prisoner by bandits tells stories to his niece, uncertain whether she will survive the night. Nummi’s much-praised 2010 novel Karkkipäivä (‘Candy Day’) is set in present-day Finland and deals with the contemporary social problem of neglected children and exhausted parents. In his ambitious 1994 debut work, Kadonnut Pariisi (‘Vanished Paris’), Nummi created a world in which it is revealed that the city of Paris never existed, and instead had been conjured up for humanity, like an illusory work of art. That title was awarded the J. H. Erkko prize.