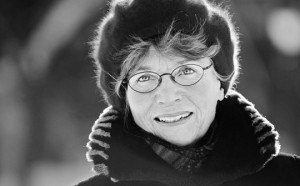 Ulla-Lena Lundberg (b. 1947 in the province of Åland) is known not only for her fiction writing, but also for her travel reportage on locations including Africa and Siberia. Her home province of Åland – the archipelago located in the Baltic between Finland and Sweden – often serves as the setting in her stories.

Lundberg studied ethnology and religious studies at university and spent a number of years living abroad – an experience which has featured significantly in her work. In her writing, she moves freely among various locations, eras and cultures.

She achieved recognition for her epic trilogy of novels about life on the sea around Åland and for her novel Is (‘Ice’), which was awarded the 2012 Finlandia Prize. That book tells the story of a young clergyman and his family who move to a remote island off the west coast of Finland in the years following the Second World War and attempt to be accepted into the community there. Ulla-Lena Lundberg manages to create a magnificent, sensitive portrait of her characters. Her love of detail makes the novel even more affecting.