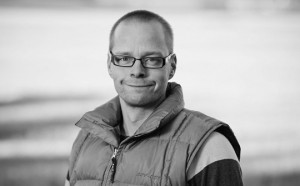 The books by Roope Lipasti (b. 1970) are characterised not only by black humour but also an intelligent view of their characters and the fundamental problems of human life: alienation and loneliness. Lipasti writes for children as well as adults and has been compared to the great Finnish humourist, Arto Paasilinna.

In his latest novel, Perunkirjoitus (‘The Probate’), two very different brothers – one is an insurance actuary, the other an odd-job man – go on a road trip around Finland with their step-grandad’s ashes in an urn on the back seat. The novel is a sharp, humorous tale about lost illusions, growing older and how even brothers can be very different indeed. Lipasti’s first novel for adults, Rajanaapuri (‘The Neighbour’), is a social satire about a homeowner’s disorganised, badly run construction project and his petit-bourgeois neighbour’s resentment.

Roope Lipasti graduated from the University of Turku in 1994 with a degree in literature and philosophy and worked as a journalist and columnist. He has also written humorous sketches for TV shows. He lives with his family in Lieto near Turku.