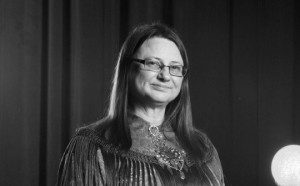 Inger-Mari Aikio-Arianaick (b. 1961 in Ohcejohka/Utsjoki) is one of the most prolific Sámi poets working today. With seven volumes of Sámi poetry and children’s books to her name, she also works as a radio journalist, film director and editor. Her poems have been translated into English, German, Finnish, Swedish and Hungarian.

Her published poems highlight a new attitude towards Sámi culture and towards the role of women; she questions the notion of a ‘genuine Sámi identity’ with scepticism. Her writing deals more with personal, individual themes, reflecting female sexuality and romantic relationships between men and women. She also addresses cultural otherness in her poetry, as well as the roles of mother, wife and daughter-in-law based on her personal experiences.