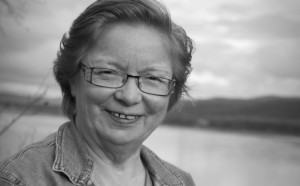 Rauni Magga Lukkari (b. 1943 in Ohcejohka/Utsjoki) is a Sámi poet. She has written more than 10 volumes of poetry in which she deals with gender roles and seeks out new forms of feminine and Sámi identity. Her writing covers all stages of life, from birth to death. The Norwegian translation of her poetry collection Losses beaivegirji (‘Bleak Diary’) was nominated for the Nordic Council Literature Prize in 1987.

Lukkari started out working as a freelance journalist for Norwegian and Finnish broadcasters, then worked as a teacher before becoming a freelance writer and translator. She was Chair of the Sámi Authors’ Association until 2000 and since 2002 she has run her own publishing company, Gollegiella, which publishes bilingual books as well as audiobooks. She has also written pieces for performance.